It's Standing Room Only for Cara Dillon at Norwich Arts Centre 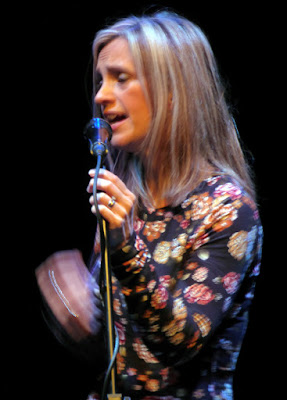 Checking back through my ticket stubs, I notice that it is eleven years since I last heard Cara Dillon sing at Norwich Arts Centre. That was back in March 2006, and was one of the last gigs that I ever went to before La Maman was diagnosed with her cancer, and consequently one of the last that the two of us would go to together. Looking back, I remember her mentioning something during the evening about feeling tired - it was a standing gig, and she went out and sat in the bar for the last couple of songs, blaming it on a long day at work. Four months later came the news that shook us to the core, and set us on the path that left two teenage children to finish their adolescence and their education without the benefit of the mothership to guide them.

A lot of water has flowed under the bridge since then, and next month sees the tenth anniversary of Jan's passing. Both children have since gained university degrees, and are both in gainful employment. I myself have regressed into early retirement, having allowed my pharmacist registration lapsed, but now volunteer at Norwich Arts Centre as part of the evening front-of-house team. It therefore seemed appropriate that I should spend yesterday evening at the Arts Centre, taking advantage of their generous policy of offering guest-list passes to volunteers, to attend Cara Dillon's show, part of a short tour of five dates as a trio with husband Sam Lakeman and Uillean pipe and whistle player Barry Kerr.

This was a seated show, although all tickets had been quickly snapped up by loyal fans. The rear of the auditorium, and the ramps at either side, were filled by those prepared to stand, and so I took my place behind the sound desk for what was obviously a much anticipated performance, and would be a potentially emotional evening for myself as well.

Cara Dillon was born in County Londonderry, although now lives in Somerset with husband Sam Lakeman, brother of Seth and Sean. Whilst her songs are hugely influenced by Celtic culture and folk music, she and Sam have never been afraid of stepping outside of the box. In between songs tonight, we learn that only last week Sam almost risked losing his hearing attending a Foo Fighters concert in Frome, staged to coincide with the announcement of the band's headlining slot at this year's Glastonbury Festival. We learn of their two children's excitement at visiting Euro Disney following Dillon's recording of 'Come Fly With Me', featured in the closing credits of Disney's 'Tinker Bell and The Great Fairy Rescue', and of  'Come Dream a Dream', the song now used in the closing ceremony each evening at Disneyland Paris. In between, Cara has sung on Mike Oldfield's Tubular Bells III, and on a Judge Jules trance single.

It also appears that Cara and Sam recently agreed to sing at a small Somerset wedding, only to find Cillian Murphy, Jamie Dornan and members of The Corrs in the congregation. Yes, Cara Dillon may seem a modest and demure mother of two, but she and Sam are nowadays, in reality, almost folk royalty.

But what makes Cara Dillon so special is her voice. Lauded by everyone from The Guardian to Mojo magazine, and praised by contemporary singers like Ed Sheeran and Sam Smith, Cara's unique voice has a steely precision that is able to cut through an audience like a knife, yet is at the same time is as beautiful and sensitive as a summer breeze. Comparisons with a young Dolly Parton or with Eva Cassidy are merely an attempt to describe what is almost indescribable.

Many of the songs in tonight's double set are traditional in origin, others have been co-written by Dillon and Lakeman, or arranged by them. There are a couple of covers included - Shawn Colvin's 'Riding Shotgun Down The Avalanche' (which appears on Dillon's 'A Thousand Hearts' album), and Van Morrison's 'Crazy Love' and Beth Sorrentino's 'River Run', but in between 'The Maid of Culmore' and 'The Parting Glass' we are treated to the whole panorama of the Cara Dillon songbook, together with insights into Celtic cultural history, such as the Parting Wakes held for those leaving to seek a better life in America. Sam is allowed access to the microphone to share some genuine facts - did you know that the average American garage is larger than the average Japanese house, or that there are more saunas than motor cars in Finland? No, neither did I. Thanks Sam. Barry Kerr is subjected to gentle teasing from Dillon, but rewarded with a lovely solo spot during the second half where he treats us to a sad lament on the pipes as well as a reel.

We may not be able to dance tonight, but we all join in with the choruses on 'Never in a Million Years' and the chokingly moving 'There Were Roses'. All in all, this was a beautiful and memorable performance, and one that I will not forget in a hurry. 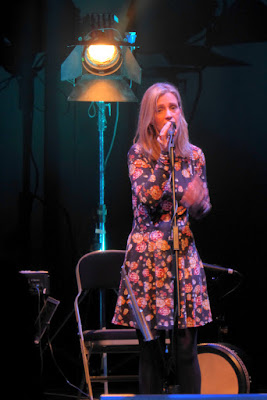