Les Auckers en France 2019 - The Manoir Experience (Read this then pass it on to Harry...) 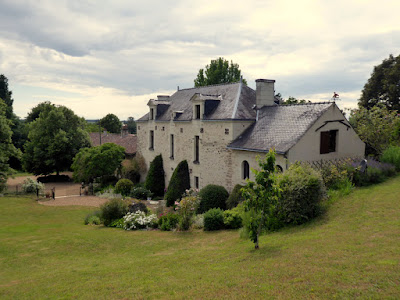 It is quite a while since I last had a foreign holiday, five years to be exact. Not that it has been a case of not wanting to, more an adopted state of inertia focused by a need to live within my means. Since giving up work, I have been living a modest, but pretty busy, life here in Norwich, volunteering at the local Arts Centre and writing music and theatre reviews for our local listing magazine. Imagine, therefore, my surprise and delight when, last March, I received an e-mail from The Sunday Times informing me that I had won a week's holiday in the Loire Valley.

And not just any holiday - oh no, this was a vast rural manor house with room for 14, situated bang in the middle of the famous Anjou wine growing area. It had an outdoor heated swimming pool, barbecue area, table tennis, and even a trampoline. A quick glance on the website for Pure France (the holiday company that offers Manoir Coteaux within its portfolio of properties) revealed what a sensational prize this was. And to make it even better Brittany Ferries were providing a return channel crossing for a car and up to four adults.

One slight problem. Who to invite along? I live on my own, my wife died twelve years ago and both my children have since grown up and left home. Just who does a retired 62 year old billy-no-mates invite along on such a fantastic holiday? Well, the prize organisers were very understanding - I could defer taking the prize until June 2019, meaning that both the children could use some of their next year's annual leave and, even better, five very good family friends from Worthing would also be able to join us. 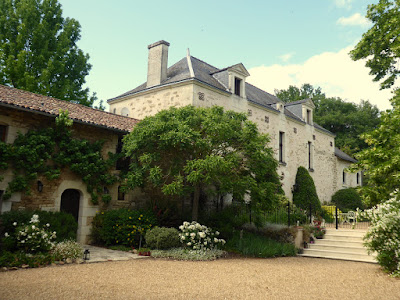 The property is a Saturday to Saturday let, and I had opted to drive my van down to Portsmouth on the Friday, catch the overnight ferry to St Malo, and rendezvous with my son, daughter-in-law and 18 month old grandson at the property on the Saturday afternoon. They had crossed the Channel the previous Saturday and already spent seven days exploring the Brittany and Normandy coast. Our Worthing friends, who are massively involved with their local cricket club, would drive through the tunnel on Sunday morning, arrive for Sunday teatime, and leave on the following Friday morning in time to make it back for the next game. They have to maintain their batting averages!

My daughter decided to take the Eurostar to Paris and spend the first weekend staying with some French friends before getting the train to Saumur on the Monday morning. She would then take a flight from Tours to Stansted at the end of the week. So, including the toddler, this made for a tri-generational party of ten. And what a party we had!

I arrived and was met at the property by the Pure France reps, Ian and Lynn who welcomed me and showed me around Manoir Coteaux. It is described as being in the village of Les Verchers-sur-Layons, a village just south of Doué-la-Fonataine, but is actually in the nearby community of  Savonnière, which consists of just a handful of rural properties, mostly wine growers. You will need your car to reach Doué where, as well as a good selection of bars, restaurants and local shops, you will find on its outskirts an excellent and well-stocked Super-U, complete with petrol station. Remember, though, that you are in France, and supermarkets do not routinely open on Sundays (although smaller local shops may open until lunchtime).

As Ian and Lynn showed me around it was like being taken on a guided tour of a stately home! In the main manor house are four enormous bedrooms, including one with four-poster bed. In the adjoining annexe are three further bedrooms. For purely logistical reasons we decided to sleep the Auckland family in the main house, and keep the Worthing friends together in the annexe. And I got to claim the room with the four-poster bed! Not that the domestic arrangements mattered, other than for sleeping and bathing. Although accessed via different entrances, and each having its own facilities, the demarcations were entirely arbitrary. We tended to use the annexe lounge area for watching the TV (our once a night 'guilty pleasure' was watching Love Island, purely because one contestants was the sister of our Worthing friend's flat-mate). 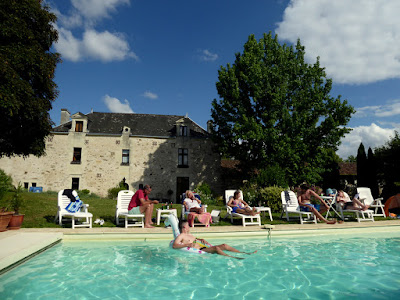 Similarly, we would all gather together by the pool during the day, on the terrace in the evening for drinks, and in the large kitchen for breakfast and dinner. On the night of our arrival the main priority was to ensure that we could stream the Champions League football final from a mobile phone to one of the colour televisions (we had an ardent Tottenham fan in our midst), so dinner that night was beer and pizza. On the second night we had forgotten about Sunday supermarket hours, so decided to get a take-away from the excellent Belgian-run 'Une Frite Une Fois' in Doué. However, for the next four nights we teamed up to create our own 'Come Dine With Me' competition, complete with entertainments, and with videos and scores being uploaded daily to the holiday WhatsApp group. The final night was a glorious 'eat-up-everything-that's-left-in-the-fridge' style operation, otherwise referred to as a 'hot and cold collation'.

And as I drove my daughter to Tours airport on the Saturday morning, I had time to reflect on the wonderful week that we had spent at Manoir Coteaux. Had the sun continued to blaze for the entire seven days we would, of course, been blissfully happy and would probably have never left the Manoir's grounds other than to purchase more beer. Everybody enjoyed the pool and, with the added security and protection of the electronic alarm, we felt secure about having a toddler on the loose, even with all the strict adult supervision. As it turned out, we had a couple of days when it was more conducive to explore the area, giving us a chance to visit Saumur, Angers and Tours, as well as visit the extraordinary Bioparc Zoo near Doué, opened in 1961 and housing over 100 different animals in a unique troglodyte quarry setting. 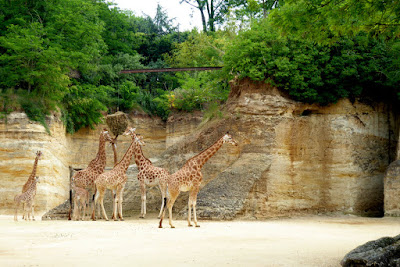 We also spent an afternoon tasting the wines produced by our neighbours at the Domaine Bodineau. Owners Frédéric and Anne-Sophie may have appeared slightly bemused when the nine of us walked in and asked to taste 'all of the wines' (it was a 'Withnail & I' moment to be sure). I hope that the orders we placed with them at the end were adequate recompense for their friendly welcome, their hospitality, and also their patience. These are the exact same wines that, for our convenience, Pure France had sent us pre-arrival tasting notes and order form, but there really is no substitute for first sampling the goods, and talking to the growers in person. The wines of the Loire are certainly delicious. They are mostly best drunk young, and perhaps for this reason they do not attain the same cachet in the UK as the classic vintage wines of the Bordeaux or Burgundy regions. I am now a firm convert to the Muscadets, the Anjou Cabernets, and even the Anjou Rouge, but I suspect they will be a lot harder to find at a reasonable price when I search them out in the UK. Good job I filled up the van ahead of my return. 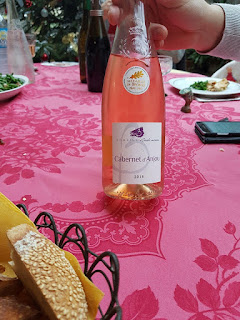 Graham, the owner of the Manoir, lives in another completely separate part of the property, and was genuinely friendly without ever being intrusive. The Manoir was filled with many personal mementos and possessions (including an original watercolour by one of my favourite Suffolk artists, Mary Grundy) and this helped to cultivate a genuine appreciation that we were 'borrowing' somebody's cherished home for the week. Ian and Lynn were also only ever a telephone call away should they have been needed.

As the rest of the party headed back to the UK, I swapped my four-poster bed for a couple of mattresses in the back of my van and spent the next seven days working my way along the Loire to the coast, visiting Nantes, then north and east to St Nazaire, Quimper, Concarneau, Dinard, St Malo, Cancale, Mont St Michel, and the Normandy D-Day beaches (where just a week earlier, on June 6th,  the 75th anniversary of the beginning of the Allied Forces' liberation of France had been widely marked), and finally spending a few hours in Bayeux before getting the ferry from Caen back to Portsmouth. It was the denouement to an incredible fortnight, with a trove of memories and experiences to store and to savour. 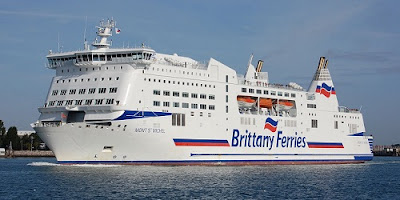 I know that newspaper competitions are largely a question of luck, and that winners are usually picked at random, but I would like to extend my sincere thanks to The Sunday Times for their serendipitous choice in selecting my name as their winner, and to Kate and Gemma for liaising with the competition promoters to make it happen for me. Thank you to Hugh, Lucie and Brenda at Pure France for organising the accommodation (yes, I would love to book another holiday with you guys at some point), and to Ian and Lynn, and of course Graham, for your on-site attention. Thank you to Jane at Brittany Ferries for sorting the channel crossings out for me, and enabling me to take my van across instead of just a standard car - I couldn't have visited all those places in that second week without your co-operation. And lastly, but by no means least, to my wonderful children, family and friends who made the effort to came out to play, and made it such a perfect time for me.

Now, to seek out the next batch of competitions...