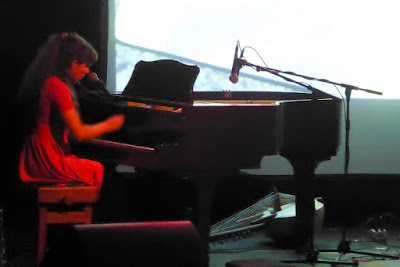 While to the West of the city Gary Numan is playing to his friends electric, and Woodland Creatures are burrowing their way into the Eaton Park Café, here in Norwich Arts Centre Bristol-based experimental folk musician Rachel Dadd is heading up a bill that includes no less than five artists. Five for a fiver, indeed. Folk That.

The evening opens in the main auditorium with the soft and soulful sound of Mari Joyce and her band, previewing tracks from an upcoming album and playing songs from her debut release 'The Tent'. Whilst fiddle player Alex Patterson may be absent, quorum is maintained by the stage debut of baby Leo, fast asleep and strapped to the chest of his mother Johanna, who sings harmonies with the band. Alex Hobbs is present on cello, as is Iestyn Griffith providing percussion on cajon. Mari is one of the most gentle and soothing performers on the Norwich folk scene. No wonder she doubles up as a qualified holistic massage therapist. Virtually the entire audience is seated on the floor, and a sense of peace and tranquility ensures that baby Leo sleeps through the entire set, and we are all transported to a higher plane. 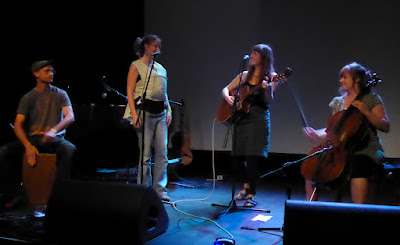 Back into the bar for a refill, and we are treated to a set by the lovely voice of Phoebe Troup, known to us from performances during the summer from the Norwich Evenings out-of-doors series of events in the city centre, as well as an appearance on the BBC Introducing stage at Latitude. 19 years old and raised in Colorado, Phoebe's inspirations clearly come from the beautiful open countryside of the Rocky Mountains, although her sojourn here in Norwich as a student at the UEA will clearly provide further inspiration. She may suffer from a technophobic fear of recording, resulting in a shortage of downloadable material, but she does appear in a number of YouTube videos, including a couple shot on the banks of the lake at our UEA by Vivienne Warland. 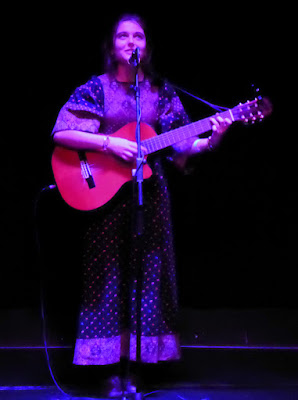 In the main auditorium we are treated to the most unusual sound of a Bristolian folk musician, Will Newsome, playing the kora, well known to us here in Norwich through Gambian musician Sefo Kanuteh. In Newsome's hands the instrument takes on an at times almost Celtic character as west country vocals waft over plucked strings of the West African instrument. Will used to skipper the ferries around Bristol harbour, where he met and started playing music with tonight's headliner, Rachael Dadd. They also perform together as 'The Hand'. 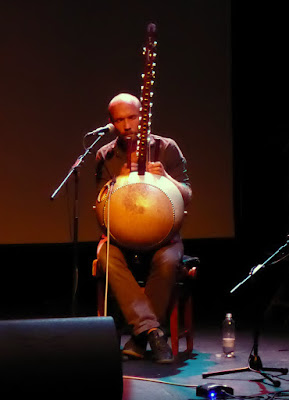 Chad Mason is sporting a new bowler hat (yes, I am old enough to remember Acker Bilk) and a Sun Studios t-shirt - a souvenir from his recent trip to Memphis, for his set in the Café Bar, and even though we have all seen him perform in Norwich countless times before, it is still a pleasure to hear him play. One day I will get around to buying one of his CD's. Tonight also sees a first for me at Norwich Arts Centre - we witness a couple of the audience actually seated on the floor of  the bar. I never realised before that Chad Mason's material could be that relaxing or hypnotic. 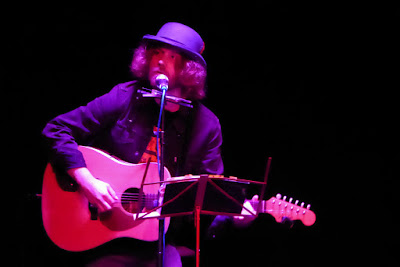 Having said that, we are all so caught up in his set that Rachel Dadd is on stage and performing before we realise it, so unintentionally miss the first couple of minutes. She is sat at the Art Centre's baby grand piano and performing a song cycle which is accompanied by a film made by her sister Betsy with assistance from Help Musicians UK. This is a beautiful and spellbinding piece - the film is abstract in style, with shots of an elemental nature - wind, water, walls, sky and a piece of batik-design material hanging on a line. As the film progresses, triangles feature prominently in the production, and at each stage point the mood of Rachael's music will change. Her voice reminds at times of operatically-trained Rachel Zeffira (from Cat's Eyes'), yet she possesses an earthy, folky character as well. The piano playing also adopts many mood changes - elements of jazz and ragtime contrasting with moments of Nyman-esque classicism and beauty. 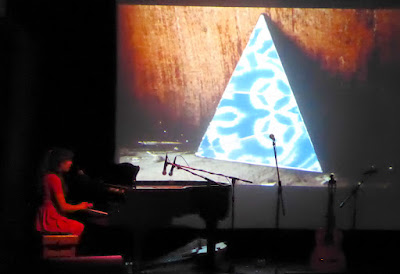 Once the film has finished Rachael continues her set with a series of songs performed with guitar, ukelele and banjo. This is reminiscent of two other Bristol-based artists who have performed at Norwich Arts Centre in recent years - Kate Stables ('This Is The Kit') and Rozi Plain. Coincidentally, the first time I saw Mari Joyce perform was just over a year ago, as support to This Is The Kit, when Rozi Plain performed alongside Kate Stables. 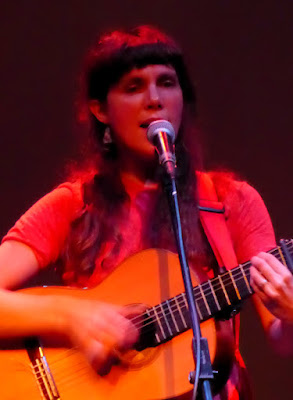 Will Newsome joins Rachael on stage without the kora for a version of their jointly written song from their Bristol ferry days, 'On We Skip', and the evening is almost over. We unfortunately do not get an encore, but the performance has been truly memorable, and hopefully we will be treated to a return visit before too long. 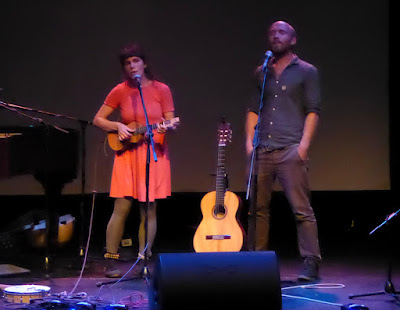 Thanks to Will for organising the whole evening, and here's looking forward to the next 'Folk That' evening on October 8th, featuring another five acts including the headliners Pictish Trail.