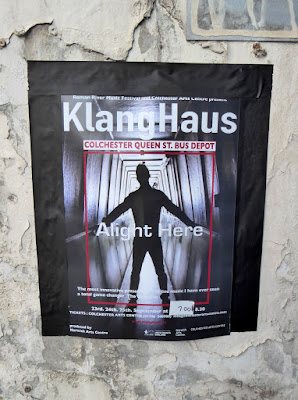 KlangHaus - The House of Sound. The Neutrinos - Norwich blues art-punk band born out of the city's post-millennial music scene. 2004 debut album Sick Love now highly sought after. Sal Pittman - visual artist and designer with penchant for squeezing light installations into tight spaces and recesses. Colchester - ancient settlement on the River Colne in Essex. Roman capital of Britain until Boudica threw a paddy and drove her chariot down the high street in AD61. Now home to a fine Norman castle and Jumbo, the country's largest surviving Victorian water tower. And a disused bus depot.

After debuting the KlangHaus show at the Edinburgh Fringe in the Summer of 2014, a three week run staged within a disused veterinary hospital in Summerhall, and a one-off show at Norwich Arts Centre during the 2015 Norfolk and Norwich Festival, The Neutrinos and Sal Pittman took the production into the roof spaces above the Royal Festival Hall on London's South Bank earlier this year. It rapidly became one of the most talked about and must-see shows of the Summer season.

Last week, KlangHaus found a new, if brief, home for itself within the old bus depot in Colchester's Queen Street, a building with a fascinating history of its own. Easy to miss, with its blue and battered corrugated iron twin doors, this building was, from 1802 until 1918 the town's 1200 seat Theatre Royal. It is reported that a certain Charles Dickens appeared here in 1849 to perform a reading in person. Fire destroyed most of the building in 1918. Only then was it converted into a home to the city's fleet of buses, although the original white facade of the theatre can still be made out to this day, surrounding those massive blue doors.

On Friday of last week a call-out for extra volunteer ushers went up. Apparently the KlangHaus performances, in which an audience of around 50 are escorted around the derelict site whilst The Neutrinos perform a series of songs amidst Sal Pittman's projected imagery, needed just a couple more bodies with torches and high-vis jackets just to make absolutely sure that no members of the audience accidentally tumbled into one of the three bus inspection pits. I immediately raised my hand, and offered to help out for the final two performances on the Sunday.

It's certainly a while since I made the journey down to Colchester. I normally whizz past on the A12 on my way to London if I want to avoid the M11 for any reason. As a kid in Lowestoft it was an essential school trip destination, either when studying the Romans in History, or just for a jolly to the zoo if the budget that year wouldn't stretch to an Away Day train to Regents Park. I therefore drove down early, giving myself a couple of hours to wander round the town before rendezvousing with the KlangHaus team. 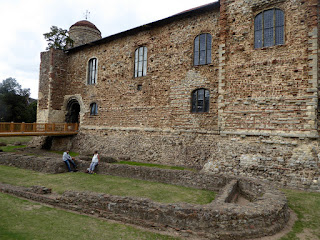 I have to be honest and say that the town centre, like a lot of medium to large towns today, looks a bit tired and sorry for itself. Apart from a nice smart Fenwicks there is little to get excited about. Any town that boasts three separate branches of Poundland has probably seen better days. The castle is obviously the must-see attraction for tourists, set in attractive gardens and parkland only a stone's throw from the hustle and bustle of the high street. A short stroll westwards takes you past the Mercury Theatre and Colchester Arts Centre to the Balkerne Gate, the largest surviving Roman gateway in Britain. On the way back you cannot miss the 131 foot high brick built Victorian water tower, affectionately known by the locals as 'Jumbo'. 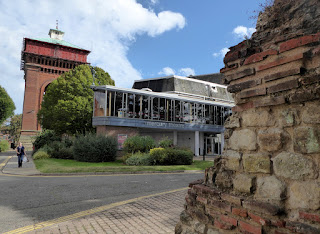 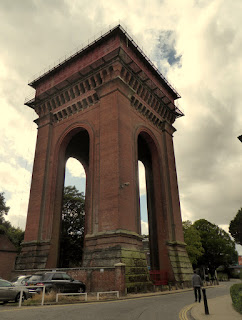 But Colchester's jewel is surely the  Rafael Viñoly designed Firstsite, a contemporary art gallery opened in 2011 on land behind the town's abandoned Queen Street Bus Station. Its sloping walls and airy interior currently hosts an exhibition currently on tour from the Hepworth Wakefield of works by the acclaimed photographer Martin Parr. With free admission, this is certainly not to be missed. 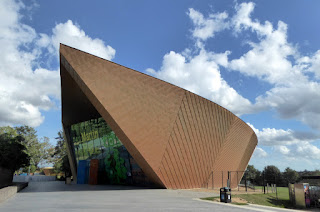 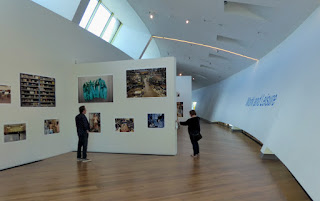 Quite what happens to the brutalist Roman House and St James House buildings that sit abandoned and neglected between Queen Street and the old bus station remains to be seen. Looking as sorry for themselves as the old Stationery Office buildings in Norwich's Anglia Square, their future is uncertain. Along with 'Jumbo' they could have also provided a suitable setting for the KlangHaus shows. 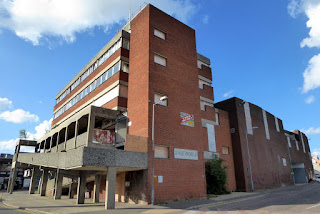 At 6 o'clock I met up with Rosie at the bus depot and was introduced to the KlangHaus team. Along with Annie, who had also made the journey down from Norwich to usher tonight's shows, we were walked around the building and the audience route was explained to us. After entering from the side of the building in Priory Street the audience are led into a narrow corridor before being beckoned into  the basement offices. After working their way up through the floors they emerge at the top of a short flight of steps that brings them down onto the main floor of the depot. They are then escorted to the rear half of the building where an original Routemaster double decker bus sits astride one of the three huge inspection pits. After being invited onto the bus for the penultimate song of the show the audience emerge to find the band performing the final number in the inspection pit. 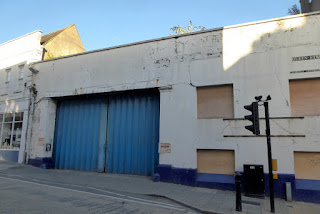 As you can imagine, performing a show like KlangHaus in a disused bus depot works best once natural daylight is replaced with nightfall. The building then takes on a ghostly character of its own, and Sal Pittman's projections can surprise and startle as an audience works its way around the site, exploring a surreal dystopian world augmented by the pop-up performances of songs and music by members of The Neutrinos. As you can imagine, the number of trip hazards and sharp surfaces, as well as those three huge inspection pits, require some careful stewarding. The entire building seems frozen in time, almost as it would have looked when the final bus drove out through those big blue doors. Even a tattered picture of 'Blakey' from the 1960s television sitcom 'On The Buses' remains attached to the wall in one of the offices. Ushering becomes a careful balance between allowing the audience as much time as they need to appreciate the spectacular lighting effects, explore the fascinating interior of the historic building, yet not miss any of the performance, and not putting themselves at risk of injury. Some of the audience appear to be real bus enthusiasts, here as much to revel in the omnibus heritage as much as the live show. That's obviously why they had called out for extra ushers. 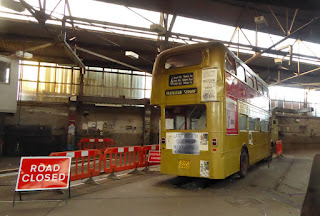 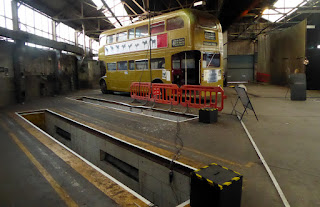 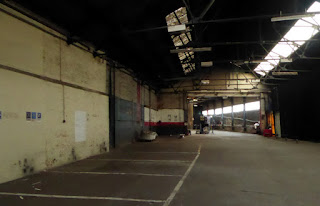 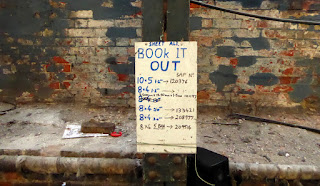 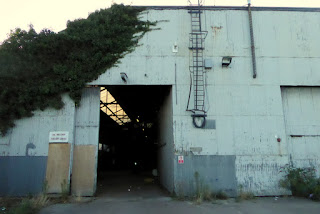 It has to be said that almost every hazard had been identified well in advance, and steps taken to eliminate risk. The audiences were, largely, happy to be led as one around the site, and were mesmerised by the show. Only a few stragglers needed to be coaxed out of cupboards and various nooks and crannies that they seemed intent on exploring. I got to see both shows, which was a real privilege, and was totally blown away by the experience. My only regret is that I missed the chance to experience the Royal Festival Hall performances, and the Edinburgh shows before that. Whilst some of the music may carry through from one site to the next, new site-specific songs are written for each location and, of course, each location presents itself as a completely new source for inspiration.

Word is that KlangHaus will visit Norwich before too long. As soon as it is confirmed I urge you to buy tickets straight away. There are only a limited number of shows, and each will only be able to play to a small audience. Do not end up being disappointed when they all sell out. This is a show that you will not want to miss.