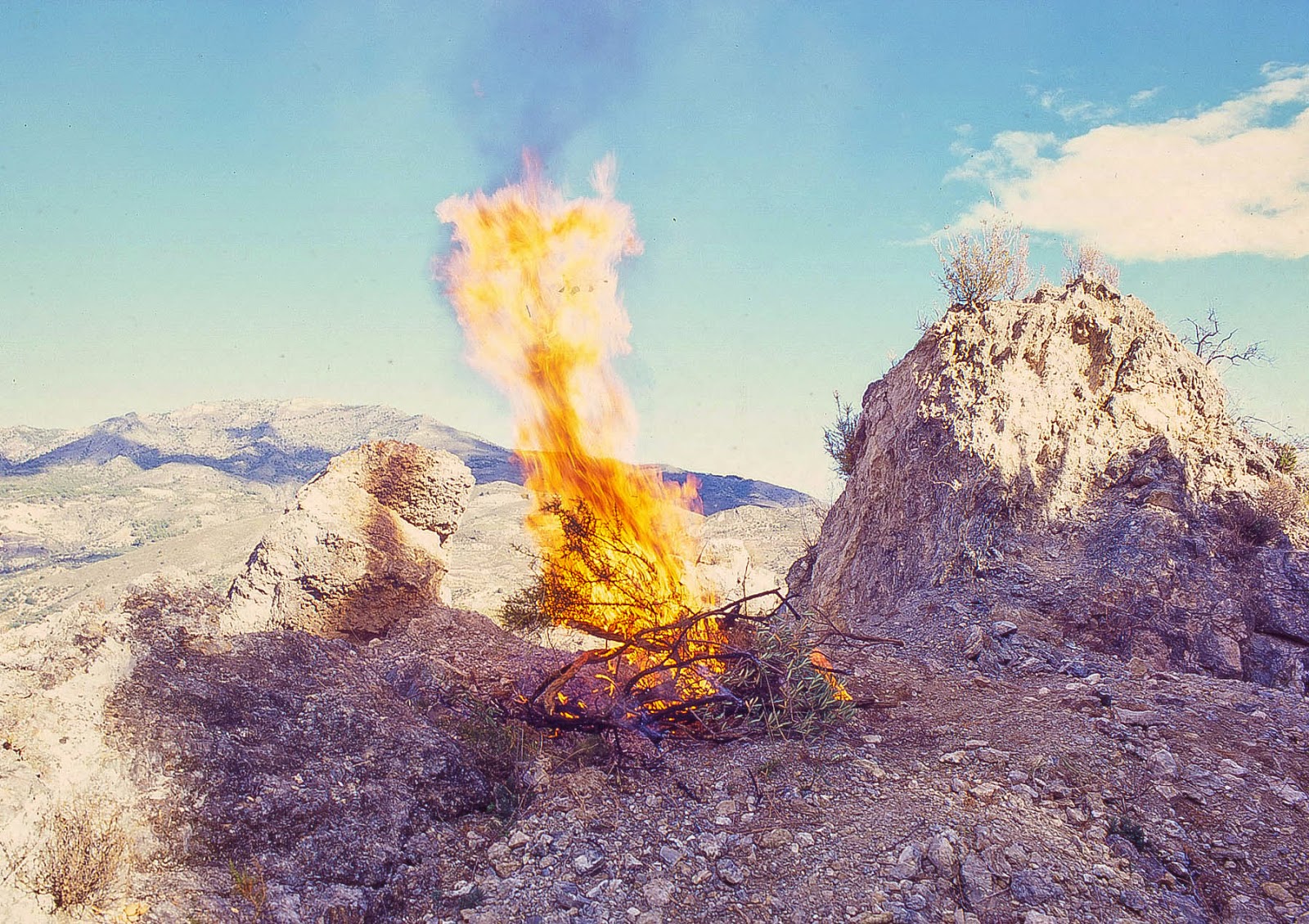 Anyone who has visited Norwich Arts Centre since the beginning of this month will have seen the exhibition of photographs featuring internationally renowned performance artists 'Lone Twin' celebrating their 19 years together (why wait for a 20th anniversary? That would be far too conventional!).

The images of Gregg Whelan and Gary Winters tell the story of a unique partnership that has seen them building a boat out of donated timber as part of the 2012 Cultural Olympiad; giving their comic timing the ultimate challenge - reciting the same joke and punchline non-stop for 12 hours whilst unable to hear one another; and a one month bike ride followed up each evening with a show to relive that day's experience. In the interim, they have become involved with everything from street dance to theatre shows.

Their current tour is a re-working of  'True West', the classic Sam Shepherd play of conflict between two brothers, set in the kitchen of a house in 1970's California. Having been performed on Broadway and having featured such legends as John Malkovich, Philip Seymour Hoffman, and Randy and Dennis Quaid, Lone Twin have now re-worked the script into what they deferentially refer to as a 'cover version' of the original play.

After starting the tour in Bristol and Guildford, Lone Twin moved on to Norwich Arts Centre, and they performed 'True West' in Norwich last night. Instead of taking a travelling company of supporting actors, they recruit a small team from the staff at each venue. After a single rehearsal session, they take to the stage along with Gregg and Gary in that evening's performance. I was part of that team last night.

Just over a week ago I had been asked if I would be interested in becoming involved. Four out of the five available places had been taken by house staff, and an e-mail had then gone out to the Arts Centre volunteers to fill the final space. I realised that the role required some singing, but was assured that this would probably be drowned by a loud backing track, and was only required to be up to 'pub sing-a-long' standard. On this basis I agreed, and put down my name. I was given a five or six page synopsis of the play outlining the sections in which 'The Table' would be involved - mostly spoken lines delivered in unison, but also with a couple of choreographed sequences, and a short rendition of the Tom Petty song 'Runnin' Down a Dream'. We were given YouTube links to videos for these.

So, yesterday morning we met Gregg and Gary, and Sonia their technical director, for the first time for a three hour rehearsal session. I won't give too much away about the show, but we would be on stage for the whole duration of the performance. Most of it was fairly straightforward, although I was a bit concerned about the singing. Yes there was a backing track on Sonia's laptop that we would be singing to, but our voices would also be picked up by on-stage microphones. To make it even more nerve-wracking, I would be stood next to Lydia who, as well as being part of the Arts Centre team, is a singer in local bands, and has a very good voice.

Rehearsals seem to pass off without major trauma, and the critical part seemed to be making sure that we timed our delivery to come in together, and at the right moment. We agreed to meet back at the venue for six o'clock, with the performance scheduled for 8.00pm.

Upon returning in the evening we found that one of our number had been called away, so we were down to four instead of five. Unfortunately for me, it was one of the male voices that I had been relying on to 'hide behind' that would now be missing from the actual performance.

A final run-through of the re-jigged script left us with time for one quick drink in the bar before taking our places backstage with Sonia. By now we sported our azure-blue ponchos, complete with trademark 'Good Luck Everybody' cloth badges.

The next hour flies by in that surreal suspension of time and place that anyone familiar to live performance will recognise. Despite having to concentrate intensely on the script, I remained sufficiently relaxed to be able to enjoy the on-stage perspective of Gregg and Gary's performance. It also allowed an appreciation of just how well they had adapted Shepherd's script to suit their own interpretative and slightly monotone delivery. The laughs came only in the right places - it is, after all, a traditional narrative rather than a comedy. 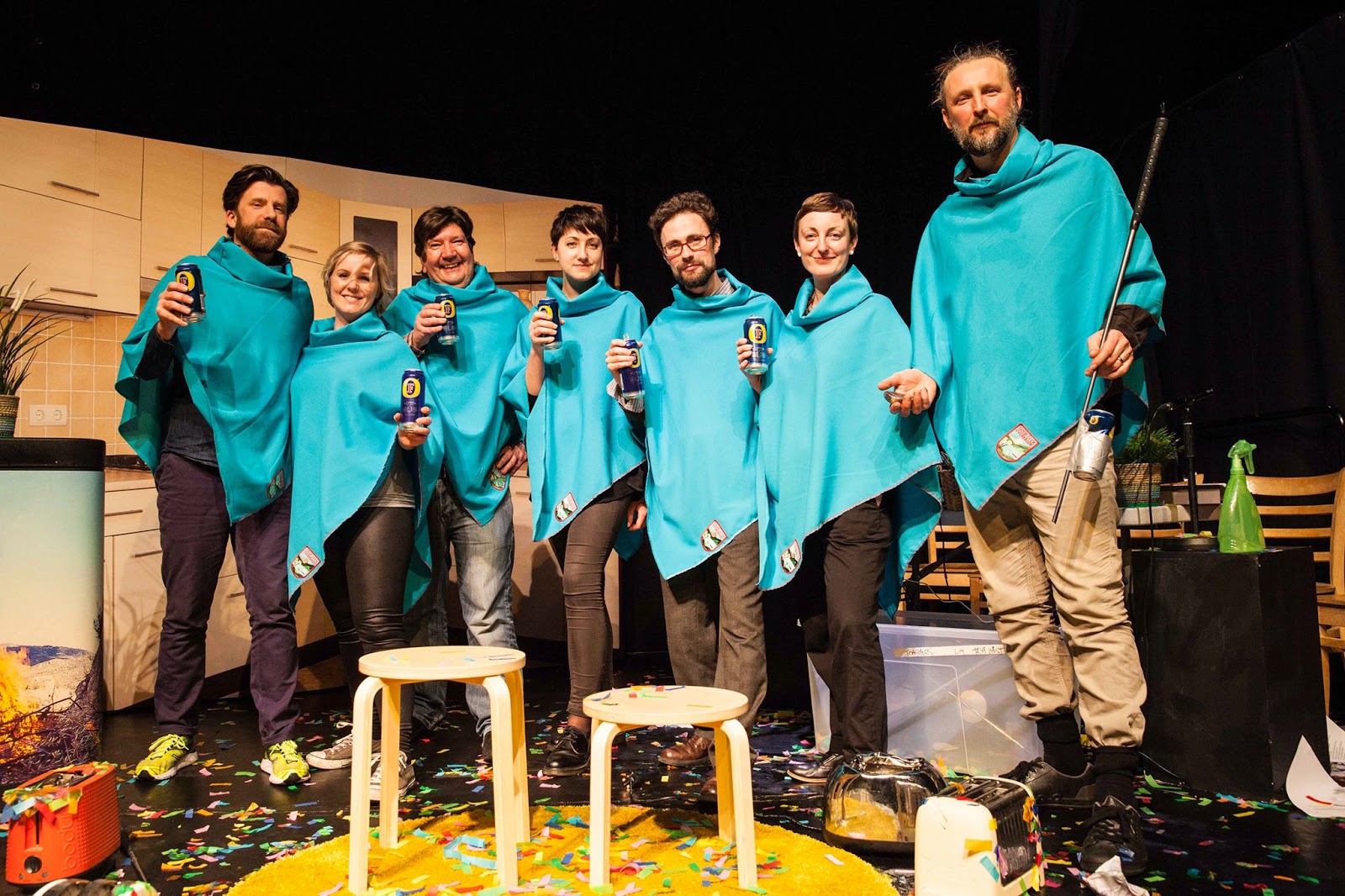 At the end we take our bows, and I remember just how much I enjoyed those euphoric adrenaline rushes all those years ago in university drama productions. However, for me this time the singing was a lifetime first. As the audience may have been able to tell, I had never, ever previously sung in public, and I had not told anybody just how nervous I was! Yet, if I have taken anything from the last twelve months since giving up work as a pharmacist, it is how important it is to experience anything and everything that comes your way. So a massive and sincere 'Thank You' to Lone Twin, for helping to break my vocal seal!

The next performance of 'True West' will be when Lone Star roll up at Cambridge Junction on March 5th. It is an inspired production, and I am sure that the staff of The Junction will also step up to the mark, and hopefully have as much fun as we did. I would certainly recommend going along if you are around in Cambridge that evening.

Just watch out for the toasters!