Young Guns (...Having Some Fun!) at The Waterfront - The Tilting Sky and Accelerator Showcase

Norwich promoter and good all-round musical egg Craig Hill had been careful to attach a rider to the publicity for this night of young local bands - yes, there is already a Buckinghamshire band that goes by the name of 'Young Guns', and no, they are not appearing as part of The Tilting Sky's showcase at The Waterfront tonight. Instead, 'Young Guns - Norwich 1' was featuring, in conjunction with 'Accelerator', Community Music East's development programme,  a taster night to highlight five young bands currently honing their skills in this Fine City.

Five bands for a fiver? What did I have to lose? 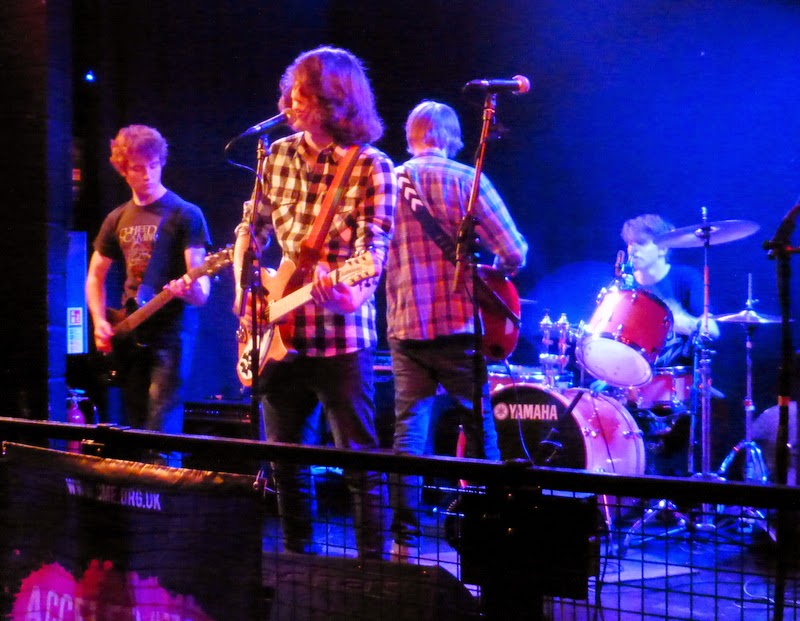 Good advance ticket sales meant that the upstairs Studio at The Waterfront was already full (plenty of friends and family at the back whilst the young crowd administer encouragement from the front), and rock four-piece 'Comic Book Ending' were already on stage. Frontman Jack Steel has already mastered the authentic low-slung guitar posturing to look the part, and the band is bristling with confidence. Watch their videos on YouTube here if you haven't seen them live.

'Perfect Mistakes' are a three piece, with vocals shared between drummer Ben and guitarist Marcus. Bass player Ollie does what all good bass bass players do best - watches everything and keeps the bassline going. Nice bit of harmonica playing from Ben, and Marcus does have a really interesting voice, with lots of potential. Although they were offering free EPs on the night, they do have tracks  on their Bandcamp page here if you failed to snaffle one. 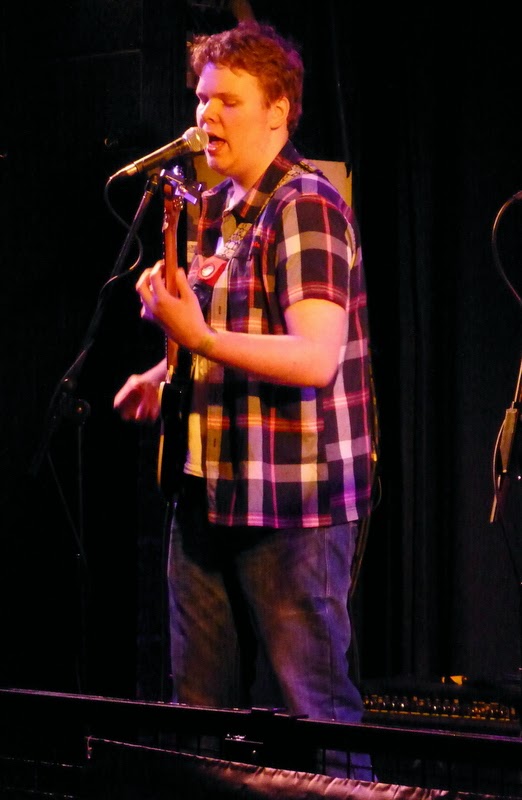 'Lobster' are a band that are making a lot of noise at the moment - well, with a line up of eight plus a  loose collective of extra musicians on whom to call as well, what else would you expect. You may have seen them busking on Gentleman's Walk, and you may have spotted tenor sax man Dominic Trevor performing with local samba-funk-rock band 'Rabo de Foguette' when they played a sold out night recently at Norwich Arts Centre. 'Like' them on Facebook here and check out there video performances from The Birdcage last year. 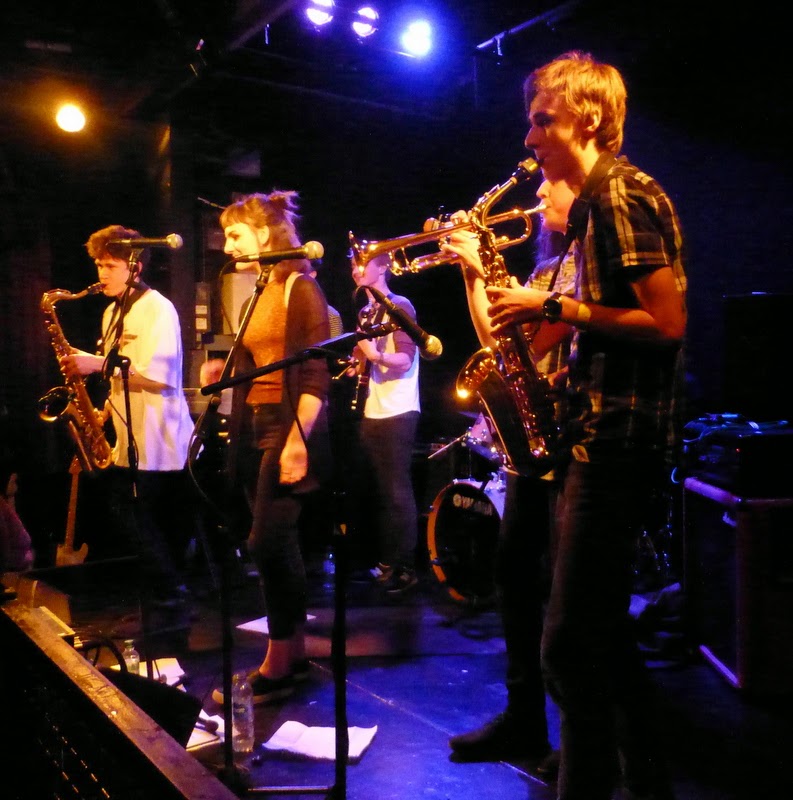 Bolstered by the vocals of Molly Holdom, Lobster's set includes their own compositions sandwiched between soulful jazz-funk interpretations of classics like Al Green's 'Let's Stay Together' and Stevie Wonder's 'Isn't She Lovely'. So much talent on one tiny stage, these guys are Norwich's very own 'Uptown Funk'. They even throw in a limbo competition as part of their set. No extra charge! 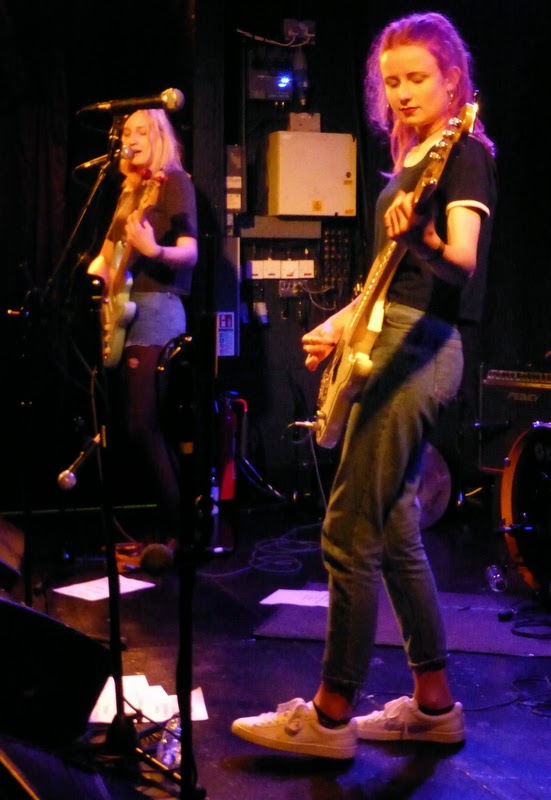 'Amazon Blu' played Norwich Arts Centre for the 'Montagues and Caplets' album launch last July, then rocked The Mash Tun in October as part of Norwich Sound and Vision. This time they are back to celebrate the launch of their own EP, available through Bandcamp here . Citing inspiration from Kate Bush and Lily Allen, but compared by others to Tracey Thorn's old band Marine Girls, 10,000 Maniacs, and The Secret Goldfish, this all-girl trio has already carved out a name for themselves all the way from here to London. Subtle melodies, assured delivery, and still only in their teens. 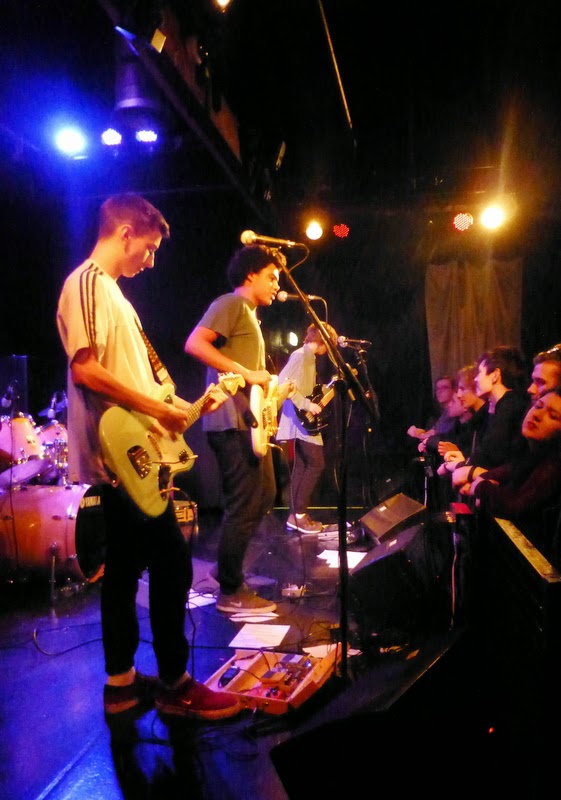 Headliners and final performance of the evening came from The Mondegreens, a four piece indie band featuring Oliver Jordan on vocals, Fred Garrett-Stanley on guitar, Gabriel Gifford on bass, and Jan Shelley on drums. They headlined a showcase evening at Epic Studios last July, and now they are back headlining the Waterfront. Find them on Facebook, or grab a track  here on Soundcloud.

All five acts are a tribute to the young musicianship in Norwich, yet it has to be said that The Mondegreens have a tightness in their playing that only comes with hard work and committment. They are deserved headliners tonight, but graciously invite Lobster back on stage for a final collaboration - a rumbustious version of Beats International's 'Dub Be Good To Me'. This is jam-hot! 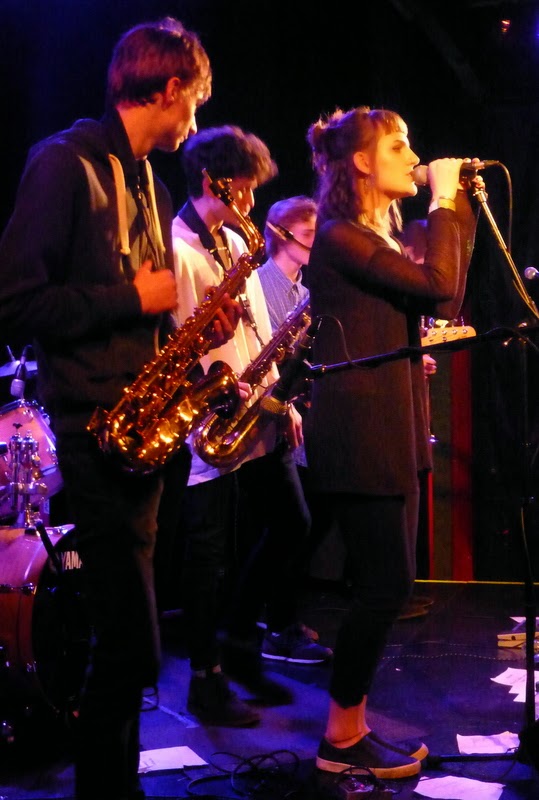 The Mondegreens and Lobster - 'Dub Be Good to Me'